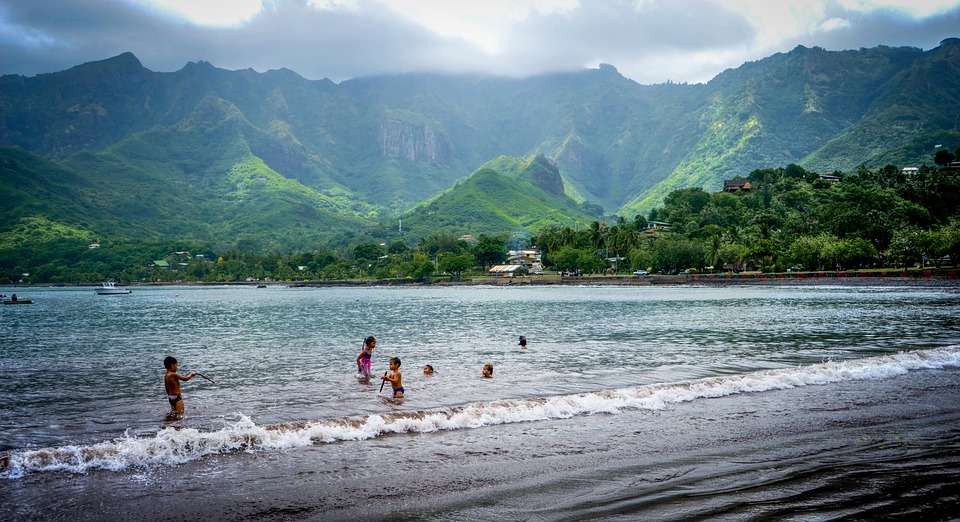 In July of this year Leslie and I were able to scratch off a bucket list item.  We flew to Tahiti and boarded the Aranui 5 Hybrid cruise/cargo ship and traveled North West 800 miles to the remote island group known as the Marquesas (French Polynesia).  Although not currently active these are the youngest islands in the region and are created in a similar fashion to the Hawaiian Islands (a hot spot traveling NW over a magma pool).

Midway through our island hopping we visited Ua Pou (Two Pillars) and from our cabin deck we could see what looked like a recent road cut into an ash dome with a very fresh basalt intrusion in it.   Although it is usually always disappointing to look closely at Pacific lava flows due to their normal lack of secondary mineral content, I was compelled to take my hand lens over and have a look.  Guess what a close inspection showed – the entire flow was densely filled with visible but small (.75x5mm) black tourmaline (schorl).  I collected some samples and started to ask some questions, it turns out Ua Pou is the youngest island and we were traveling to an older island the next day.

I didn’t get my hopes up, fully expecting to find barren basalt on Ua Huka (Silo) but I carried my hand lens anyway.  Surprise, naked eye visible black tourmaline (3.5x?mm  ) and now micro sized garnets (Pyrope) start to appear.  This collecting was done at a river mouth on a beach so the size of this occurrence is unknown to me.   Collectable pieces were rare but findable amongst the beach rock that was mostly barren basalt.  This brought up more questions; the answer to one was that we were traveling to the oldest island the next day.

We arrive at Fatu Iva (To Arrange) and everyone is getting sunscreen and cameras together; I have packed my hand lens and a back pack and head into town to the markets where there are said to be stone carvers! I walk in and look at some tables of carvings and stop dead in front of a 1 foot wide and 2 foot long  stone carved bowl that has large (7x?mm ) dense black tourmalines throughout the entire piece.  The carver was not there but his wife said he gets his stone from an ancient quarry on the edge of the island.  I immediately set off for the beach and found several pieces of stone with large tourmaline but the big surprise here was the size of the garnets (Pyrope).  Large, too big to bring home, boulders with 1” diameter garnets could be seen and clumps of tourmaline (golf ball sized) could be found.

In all the islands there were no granitic dykes, no quartz intrusions that I came across.  Some vesicles of plated calcite crystals were visible with a lens on Ua Pou but other locations showed none.

This by no means was a scientific study.  My main curiosity up to this point was my search for good French wine but that would be another article.

Aruu Ruu (Thanks in Marquesan)